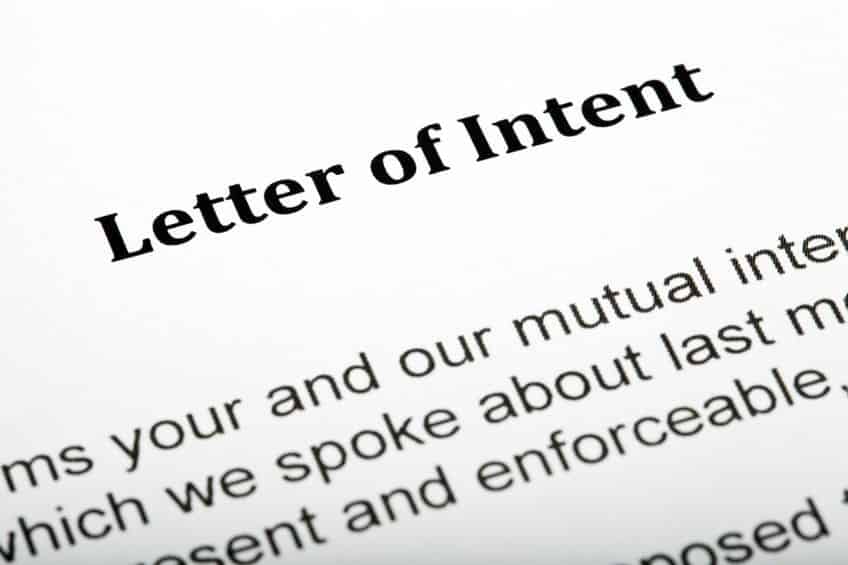 A letter of intent (LOI) refers to a document that outlines details of an agreement that two or more parties are yet to finalize or sign. As the name suggests, the letter expresses the intention of one or more people to enter an agreement.

The LOI spells out different issues that are important to the successful implementation of an agreement. It provides specific information that helps the parties to know what the agreement or contract entails.

To make it simpler for all, the letter of intent document declares one party's preliminary commitment. In the letter, one party expresses commitment to do business with another.

Letter of Intent – When is it used?

The letter of intent is common in almost all major business transactions. It convinces investors that a deal is about to go down. That way, it clears any doubts that the investors might harbour about a particular investment.

However, it's important to clarify one thing; that is, LOIs are not limited to business transactions alone. Employees can write LOIs to their employers. Prospective students can also write it to colleges and institutions of higher learning.

LOIs are proof of commitment. They prove that all the sides negotiating a deal are willing to commit themselves fully to have an agreement in place. These documents, as you will learn from letter of intent legal translation, have several provisions.

For example, in one such provision, it could be stated that the final agreement would only be signed if finances or investments are in place. Additionally, it may state that the deal would die if the parties involved failed to sign it by a specific date.

Is a Letter of Intent Legally Binding?

A letter of intent is not legally binding. As stated above, it's only proof of commitment. Agreements and contracts are legally binding since they are the result of intense negotiations involving lawyers.

Nevertheless, it's possible for the LOI to be legally binding depending on the language used in drafting it. For the most part though, it remains non-binding because it features language that states that clearly.

At times, it might be advisable to seek the court's interpretation to determine whether the letter of intent document is truly legally binding. If the court rules that it is, you should tell experts in letter of intent legal translation to mention this clearly.

Purposes of the Letter of Intent

The LOI seeks to achieve specific purposes. As repeatedly mentioned above, it's an expression of intent, commitment, or willingness to do something. More than that, it can also prove quite effective at the following:

Hire Experts to Write the Letter of Intent

Lastly, it's important to mention that anyone can write a letter of intent document. However, for the purposes of business transactions, it would be better to allow lawyers to draft this document.

Assuming that the parties don't all speak the same language, the letter of intent legal translation should be sought. The most important detail to remember is that the LOIs are not legally binding unless the courts determine that they are!

Contact us today for a free quote on your legal document!
CUSTOM QUOTE
Help your team translate better!
Click here

Thanks for the SUPER QUICK turn around!

It was very professional. I can refer Technovate Translations to whoever needs translation!

Thanks so much for your prompt service – the client interview went very well with the interpreter. Much appreciated.

Thank you! Your translator is fast! Thanks for the great work on this.

We found Technovate Translation to be professional and business–like in our dealings with them.

Great! Efficient! Really pushed him and he got it all done. It was wonderful.

It was very professional. I can refer Technovate Translations to whoever needs translation!